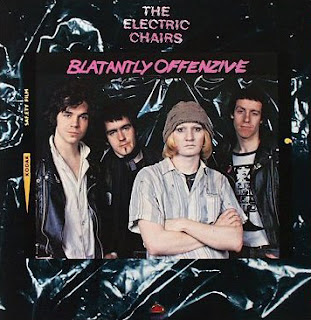 "Vulgar, derivative, flamboyantly gay and often idiotic, the Electric Chairs were pretty much everything you could want in a rock and roll band." - whizzkid1.com


"I think the original idea was to be a trashy Punk rock n' roll band, centred around Wayne's unique performances with a deliberate sense of humour, and things developed on from there. There was humour in the music too, and occasionally the general humour got misread, leading to a few wild scenes and some moral indignation. From what I remember from the vast majority of gigs (especially through '77 ) and based on the wild responses of the audiences at that time, a good 'Chairs gig' had the potential to transcend that 'novelty' band tag Bollocks". - JJ Johnson 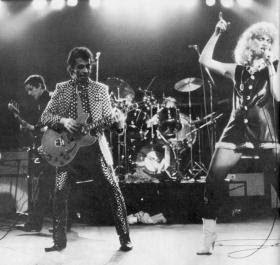 "Treading the boards for the first time in the 1960's, doing impersonations of Cher, Dusty Springfield and Janis Joplin, Wayne County was causing a stir in America long before he hit the UK punk scene with a vengeance in 1977. In just two years Wayne and his band The Electric Chairs released three full albums, several singles and the notorious "Blatantly Offenzive" EP. 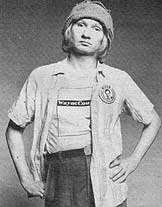 But for once there was more to this "punk" act than a mere desire to shock and outrage, many of Wayne's songs reflected the inner hurt and anguish caused by his explicit transexuality. 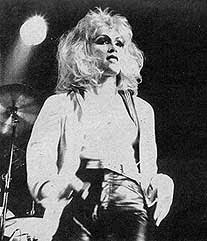 By the end of the decade Wayne had begun a full sex change to emerge as Jayne County.." - RPM


"If punk meant being yourself and standing up for yourself and what you believed in then Wayne/Jayne was one of the most honest exponents. Whatever label you put on it he stood up for what he believed in and had the guts to confront prejudice be it musical or sexual and do what he wanted to do...

Having played to rednecks as a cross dresser, worked smaller clubs for years and hospitalised 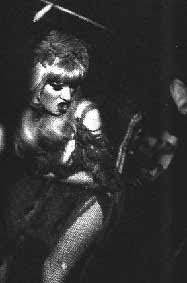 ex wrestler Dick Manitoba from the Dictators with a mike stand after being heckled, the London punk scene held no qualms for Wayne. But then again he needn't have worried. His outrageous stage act and lyrics coincided perfectly with the nascent punk scene and swapping Max's and CBGB's for The Roxy Club and Vortex was no big deal. Along with the Heartbreakers and to a lesser extent Cherry Vanilla, Wayne County & The Electric Chairs were the Americans in residence bringing fun, energetic stage shows and history with them." - Punk77

"It's hard curbing my enthusiasm for this album...Influences abound here...'If you don't want to fuck me baby well baby fuck off...Yes indeed! While the music sounds like some boogie woogie tune till the ramalama punk ending kicks in the lyrics and obscenity are pure over the top punk...Eddie & Sheena starts off as tongue in cheek 50's rock'n'roll ballad...Blues, quite strongly, and even doo wop show their faces, 28" Model T being a hilarious vocal harmony number about a...car. The one group written song is Big Black Window that 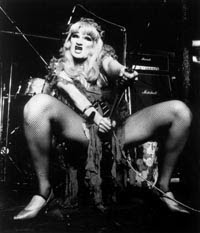 slides along supported by a crawling bass riff...Toilet Love about some dodgy S&M club in New York and a gratuitous Mean Muthafuckin Man. Nice version of Night Time tho! Blatently offensive is an apt description!...On The Crest,it's an excellent out and out punk rocker and recommended!...Wayne turns fearsome for Rockn'n'Roll Resurrection, about dead rock'n'rollers like Hendrix, Joplin and Brian Jones 'Rock me Jesus/roll me lord/ wash me in the blood of rock'n'roll'... Squeezer Jools Holland appears on Hot Blood, adding slick bar room piano backing......Val Haller - Bass & JJ Johnson - Drums really know their stuff, always spot on on all the songs...Cook is perhaps the main ingredient always keeping a grip on riffs but also making space for solos and hooks...this band have humour (and) skill..." - Pete Maggs Summer Salt No3 Fanzine 1978


"None of County's albums were ever released in his/her native country of United States, except for three songs on the very early punk compilation, Max's Kansas City." - wikipedia

Hi,
thank you very much for the Electric Chairs Album. Got this on vinyl too (with 3 different tracks: Worry Wart, 28 Model T, Plain of Nazca). Guess i´m complete now..
From the backcover of a best of Album, here´s the cool, rare, original 'Eddie & Sheena' - COMIC !!!
Eddie___Sheena.jpg: http://www.divshare.com/download/763287-6fa

Maybe you would like to add it......
Thanks again,
Ravenhead

great post.. fond memories.. & these guys could rock too! where're any wayne county's today, i wonder.. instead my chemical romance, yech!

Killer post....and of course Wayne now Jayne is still gigging to this day.

The band is definitely on fire, not so sure about the later line-up. Just the right amount of camp that puts the wild cherry on top of it all.

@Ravenhead:
Thanks for adding the E&S link.
I'm adding it to the post.

Wow great stuff, of course growing up in the midwest I never heard of these guys. Thanks again dgrador for educating me once again.

Wow, thanks for this post. I love all Wayne County's stuff :) good choice!

I know Robby had mentioned to me about these guys a while back but I drag my ass too much. Anyhow... I'll put 1978's "Man Enough To Be a Woman" up pretty soon. I promise.

'So New York' contains Jayne's best recordings since the Electric Chairs. You can find it at GEMM or in her own store.

It was certainly interesting for me to read this blog. Thank you for it. I like such themes and anything that is connected to this matter. I would like to read more on that blog soon.