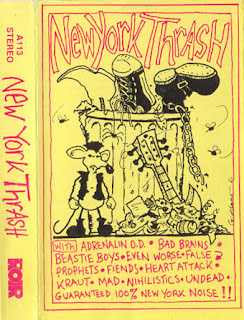 
"Legendary 1982 NY tape comp. on ROIR tapes, first bootlegged to vinyl, then rereleased legally on LP and CD. Punk rock and early hardcore, mostly taken from old 7"s. Most of this stuff is pretty good; just get it." - FLEX!


"Put down the magazine and go buy this. NOW!

For those of you in my demographic (I think it’s recently changed from 29-34 to 30-36, since people are getting older, but still religiously listening to punk rock), you should have a couple of the original ROIR (Reachout International Records) cassette-only releases from way back in the dark ages of 1983 or thereabouts. Me, I have two of them: The Dickies We Aren’t the World and the Fleshtones. In recent years, oh say over the last eight or so, ROIR decided to re-release these collections on CD. This is an incredible gift to the world of punk rock, as cassettes have a way of disappearing, and the chances of someone finding one today are very rare, unless you scour the yard sales and used music stores with a fine-toothed comb.

Most of these recordings are obscure studio out-takes that really were good enough for an album, but were shelved for one reason or another; live recordings that otherwise would never have made it to vinyl (or tape) or collected singles from great bands that didn’t have the good fortune of starting out in the mid-1990s, when everyone has a recording deal.

New York Thrash, originally released in 1982, features the heart of the New York City (natives or punk emigrants) pre-crossover punk-hardcore era, bands that were heavily influenced by the ’77 punks, actually were ’77 and pre-’77 punks, or simply picked up a guitar and tried to ape the Sex Pistols and Ramones after hearing a couple of songs on the excellent college radio stations or the punk/New Wave mainstay, WLIR, in the area at the time (that time has since gone, folks -- R.I.P.). New York Thrash features bands like the Mad, Kraut (does anyone who isn’t under 30 know who Kraut were? Hello!), Heart Attack, the Undead, and the mighty, mighty Adrenalin O.D. You’ll also find bands such as Fiends, the Nihilistics, Even Worse, the False Prophets, the Bad Brains, the Stimulators, and believe it or not, the wet-behind-the-ears Beastie Boys.

Why this collection is important to own should be more than obvious: here is genuine punk rock, serious vintage punk. To some it might sound dated, why? Easy: it sounds too punk. Too punk for folks who think the whole “alternative” music happening just appeared out of nothing in 1992.

It’s important for everyone who reads Ink 19 to own a copy of New York Thrash, because you need to understand what really was going on in the early 1980s. If you’re watching TV and seeing those retarded ads for 1980s collections, you’ll think the entire world was hooked on shit like Frankie Goes to Hollywood or Culture Club. The truth is those bands were as corporate as they come, just like the “alternative” (is that term fucking meaningful any more?) crap we’ve had to endure since radio discovered the huge market of disgruntled 1990s kids. Sure, some of that “new wave” crap was pretty good, but when I heard real punk rock and hardcore, it did something to me; I was overcome by an incredible, liberating feeling. This is the music that spoke for me then and speaks for me now. (I bought my first leather jacket, when? I’ll tell you when: a year and a half ago! I was 34! You spoiled teenage brats with your rich parents who shower you with the money to get your damned tattoos and “punk” costumes, and pick you up after a “punk” show in 1998 better buy this, and you’d better like it and seek out the rest of the albums, if they’re collector’s items, steal them, make tapes and circulate the tapes all over the country.) If it doesn’t speak for you now, and if you consider yourself a punk, die." - David Lee Beowulf

the roir tapes were great- The Bad Brains one predated their vinyl.

i wish i still had my leather mc jacket with the Kraut sticker on the back.

thanks for posting this- my tape is long gone!

For me, ROIR demonstrated that a band didn't have to follow the same old path in order to get the music out there.

Thanks for your insight, nazz.

OMG!!! thanks so much for upping this!im 33yo and when i was in 2nd grade i got this tape along with the 1st bad brains, beastie's 'pollywog', S.O.A 'no policy', & GI 'legless bull'. have no clue now as to what drove me to become interested in punk at thst age but...

anyway quick story, since then i been collecting punk music and had quite a few gems! unfortunately, 2 years ago i was forced into eviction and had to stay with 'friends' til i got back on my feet... needles to say I LOST EVERYTHING!!! 20 YEARS OF COLLECTING DOWN THE TOILET! so, if anyone reads this PLEASE take my advice and know that you should be wary of ANYONE, even those who you have known for the past 20 years. anybody has the compacity to completely rip you off!

anyway you made my day! it may be 'un-punk' to say so, but i completely embrace computers and technology! without it i would have to wait probably DECADES to regain my music collection but with the web, its surprisingly taking a lot less time!
THANK YOU!
"Hello mrs richars... is paul home???" hahahahaha!

sorry for double post but if you wanna correspond (anybody): Hashi-Tashi@Live.com

and an interesting bit of trivia about 'new york thrash'...

'screaming mad george' from The Mad was also in a band called The Disgusting and later went on to do gore special effects! ever see the Nightmare on Elm Street where the girl turns into a cockroach in the giant man-sized roach-motel? yeah that was his handiwork!

Thanks so much for posting this, im 32yo, and this was a popular tape for me and my friends in highschool, its sooo good to hear asian white again, for the first time in probably 10 years, thanks to this blog!!!