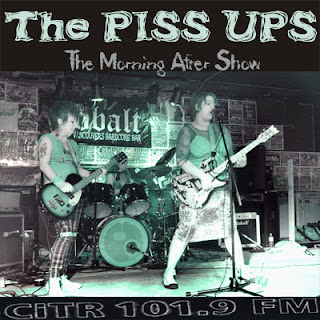 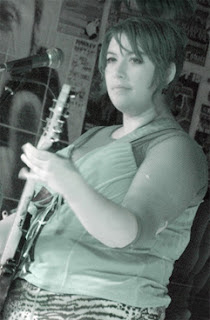 Voted Most Likely To: Lead the next feminist revolution
Bastard Daughter of: Syl Sylvain (New York Dolls).
People Most Admired: Jennifer Finch (L7). Texas Terri. Women who can fuckin' scream, they give me chills, you know.
Favorite Saying: Mr. TV rots your brain just like Mr. Crack Cocaine that's from Kids in the Hall.
Most Jaded Lyric: Our newest song, called Corpse Can. Probably the crudest song I've written yet. It's just basically about how I don't really give a shit about what happens to my body after I die. The last couple lines of the first verse are: "If it's what I wanted would you eat me, pickle me, and keep me in a can?"
Breakfast of Champions: Cold pizza and warm beer.
Band Class Instrument: I played Tenor sax in junior high but my music teacher was such a fucking prick and so discouraging I gave up music for two years after that. He always referred to me as the future art student because you had to choose between music and art. But then I picked up the guitar. This guy I was dating, when I was thirteen, he was involved with a bunch of people that set that teacher's car on fire with napalm.
Most Memorable Jaded Jinas Moment: Being on tour with Dirty and the Derelicts (Dirty Jina Tour). I don't know if my bassist already told you about the girl in the bathroom damn. Well, Greasy from Dirty and the Derelicts told me that month was like International Masturbation Month so maybe that had something to do with it...
Recent Sausage Smashing: The last time that we played here at the Astoria, three of my band mates were standing with a few other girls watching the band and this guy (cough, cough Al cough, cough) came up behind them and in a row smacked all their asses. I think the girls in my band didn't know who did it but a good friend of mine, Sylvie, saw it go down and she fuckin' marches up there and was like, "What the fuck is wrong with you?" and totally bitched him out. I thought that was really cool, she was like an honorary Jaded Jina that night.
Best Advice: Don't take any shit. 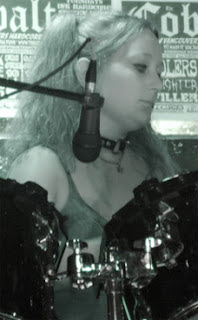 Voted Most Likely To: Freak out if something goes wrong with a show.
Bastard Daughter of: Ozzy Osbourne and that Tarrie B. from My Ruin.
People Most Admired: Marilyn Manson. I just think he's fucking amazing. I read his book (The Long Hard Road Out of Hell) when I was younger and he totally inspired me. William Wallace, Hunter S. Thompson. And Jim Henson because I'm a make-up artist.
Claim to Fame: I did the make-up for Orgy of the Dead, the gory burlesque show that the Tabloid Review puts on. It's like an Ed Wood movie made into a burlesque show. Well, it wasn't just me there were three of us.
Favorite Saying: Don't get drunk and drive get high and fly.
Most Jaded Lyric: You stupid fuckin' RED NECK! Or we all hate Bif Naked, that one's pretty good: "She's no bark, no bite, we don't care about celebrities we have our own lives" I don't know if that one's jaded, I'm just throwing out ones I like here.
Breakfast of Champions: A bong built into your bedpost.
Band Class Instrument: Violin and piano. Guitar, I still play guitar, but drummers are more in demand, especially girl drummers.
Most Memorable Jaded Jinas Moment: The Dirty Jinas tour, first time I ever sang on stage. Itwas "Dirty Old Town", by The Pogues, with Dirty and the Derelicts with every show on that tour. That was pretty exciting and memorable for me.
Recent Sausage Smashing: I'm not a fuckin' man hater. I like guys, I have an awesome boyfriend, but I still like to smash sausages that deserve it. You know Myspace? This guy sent me a thing that was like, "Do you wanna swap naked pictures?" but he was like, 17-years-old. I wrote him back, "You little fuckin' idiot." I don't even remember what I said but I went off on the best rant I've ever gone off on anyone.
Best Advice: Don't listen to criticism. Let it fuel your anger to make you want to be ten times better. Don't give up.