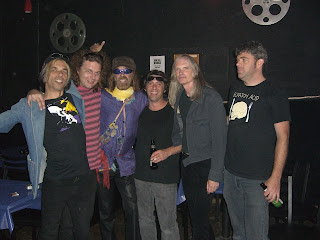 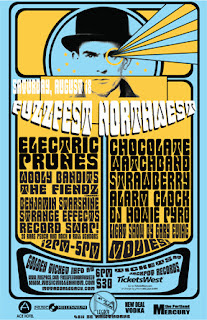 Also The FIENDS will play in the afternoon at Centaur Guitars. 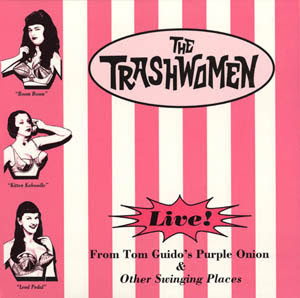 "There was a local SF band called the Trashwomen that played dirty garage / surf rock which I recommend to all you Yeah Yeah Yeahs fans, if you can manage to track down a Trashwomen album you can then throw out your Yeah Yeah Yeahs albums and your roommates will thank you." - whir

"God, the Trashwomen are one o' my fave bands ever. That whole dirty, wet, sproingy guitar, the glorious absence of hi-hats, the thunking primordial bass, and that yowling-cat vocal style... If I had my way, EVERY band would sound like this. I actually disbanded my first combo after I got the SPEND THE NIGHT WITH THE TRASHWOMEN longplayer back in the 90's, simply 'cause they already had exactly the sound I wanted, and had done it a thousand times better than we ever could. When people asked when we were gonna put out a record, I directed 'em to buy the Trashwomen's spinner instead. They all understood when they heard it...

Elka Zolot, where are ya now when we need ya the most?" - ajarvez


"As far as I'm concerned, The Trashwomen had the most evil sounding low E I've ever heard coming from a surf band." - Deltones


"The Trashwomen have an attitude that takes no flak from anyone; leopard print outfits, mean looking snarls, and so on. With their '60s garage revival sound that flies from three-chord punk to a handful of surf instrumentals that sound as if the band can barely keep it together, the Trashwomen perfectly capture the tough-girl essence seen in Russ Meyer's Faster Pussy Cat, Kill! Kill!. Fans of the Rip-Offs, Supercharger, and the Hissyfits would enjoy this." - Mike DaRonco 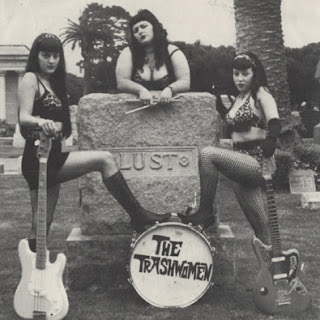 Tracklist:
A1 Gear Masher
A2 Turd Bath
A3 Queen of the Surf
A4 Scream
A5 Pretty Baby
A6 Space Needle
A7 Catwalk
A8 Let's Have A Party
A9 Malaguena
A10 Justine
B1 Trashwomen's Revenge
B2 KFJC DJ Brent Indie Interviews The Trashwomen
B3 Margaya
B4 KFJC DJ Brent Indie Interviews Michael Lucas
B5 Dragula
B6 Quasimodo
B7 Aphrodesia
B8 I'm Trash
B9 Nightmare At The Drag
B10 Jamaica Farewell