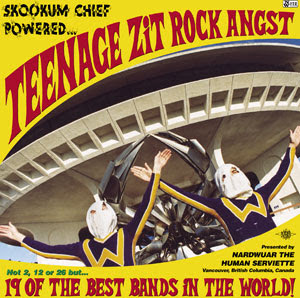 
"'Way-north-o-the-border, Nardwuar "The Human Serviette" is well known and , uhh, loved for his acutely Canadian brand of ambush journalism (conjure, if you care, Howard Stern Meets Martin Short). But out here in the civilized world, Nardwuar runs a few bands along with his own label, the latter of who've just released The Compilation Album Of The Decade So Far. Besides a real beauty assortment of garagecore and hardpop, you'll particularly dig the alternative lounge stylings of Harvey Sid Fisher, not to mention Jersey's always beatful Sit'n'Spin. And if you order today, your "SCPTZRA" LP will have a FREE CD enclosed, whereupon you can hear the Human Serviette's very own Goblins combo terrorize a local radio station for 29min 20sec." - Gary The Pig

"Nardwuar the Human Serviette has got that geek mojo working. It's all in that special voice. Gilligan meets nitrous oxide. When he ups the pitch, when he's on, ambush-interviewing a Mikhail Gorbachev or a Mickey Dolenz, he tends to get the goods.

For years Nardwuar has hosted a radio show on CITR 101.9 FM. It's a low-watt campus affair broadcasting from UBC. The affiliation has afforded him access to most anybody willing to play along with media...

When he hooks them, Nardwuar latches right into the flesh. No pat question. He knows his subjects. The arcane details, the very stuff of self-referential pop kultcha he lugs around crammed inside of his head, draw the celebs out, ready or not.

Another good thing about the mischief-maker is the fact that he happens to be a shameless promoter of place. The suffix "Vancouver, British Columbia, Canada" is stuck all over the merchandise -- like the album covers for the vinyl records with the free CDs he puts out on his own label. The skewed vagaries of this great country show up in the odd songs covered by his band or included in a compilation album like 1995's Skookum Chief-Powered (note local eatery reference imbedded in title) Teenage Zit Rock Angst. There you will hear among the not two, 12 or 26, but 19 of the best bands in the world..."
- Michael Becker 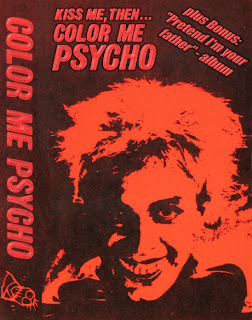 
"Trash. There I said it. It’s one of the essential ingredients in Horror punk. Trash, like the New York Dolls sang about, Trash in the way the Cramps would shout it, and Trash in that overdriven attitude of teen energy that all us old bastards only wish we could recapture. I have news for you kids, youth is wasted on the young. Speaking of young trash, one Alistair Hexx, before he changed his name to Jackson Phibes was a purveyor of near perfect trash when he fronted the band Color Me Psycho, which last I heard he liked to call Color Me Sucko. Calgary Canada’s great fuzz and organ driven garage rock revivalist who while never overtly horror playing the Psychotronic playground of genre fair, bashing out tunes about sex, and weird gods, deadly cars and fear." - Iren


"Since starting out in the primordial-ooze of the Calgary-based garbagy/garagy Color Me Psycho, entertainer Jackson Phibes has been dishing out macabre-tinged rockin' slop to disbelieving audiences for over 13 years. CMP managed to stay together for 3 years of tyranny and stagnation, releasing a few tapes and one full-length piece o' vinyl (the now collector's item "Pretend I'm your Father" album).

Immediately following the demise of his first ill-fated stab at the small-time, Phibes (who was still toiling under the dubious nom de axe, Aleister Hexxx) set about initiating a head-long dive into the horror-rock ghettos with the Forbidden Dimension." - Sidetrack Cafe 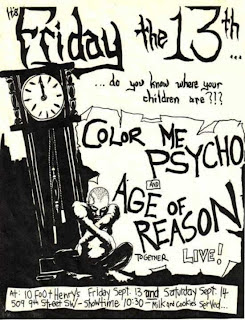 Another fine contribution from Mitch Useless! 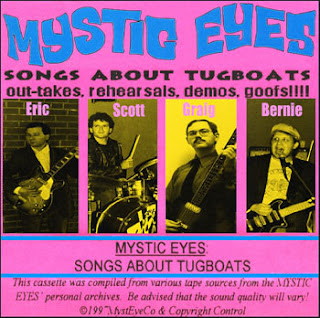 "Bernie Kugel wrote some of the catchiest, most memorable garage tunes of the 1980s. His ability to mix the jangle of the Byrds with the snot of the Seeds was unparalleled in the genre, and his band, The Mystic Eyes, was the lucky recipient of his talent...

Kugel really can't sing, so this is why The Mystic Eyes were sure to remain firmly planted in the garage tradition. In more delicate hands, some of the Mystic Eyes love songs would be reduced to standard pop. Under Kugel's direction, however, even the most gentle of love songs retains that certain garage-rock edge." - Timothy Gassen


" I think I was still at the University of Rochester when I first heard Mystic Eyes, though I can't remember if it was via a recording or a live show they did in Buffalo with the Chesterfield Kings. I do remember my reaction to their first 45, "My Time To Leave"/"From Above" (Get Hip GH-102). The A-side original was nothing short of amazing. An Acetone organ-colored anthem, "My Time To Leave" took its place in the BlairBoard Top 10, spending quite a few weeks at #1. (Indeed, it holds an honored place in the hallowed halls of the music museum of my mind.) Underneath, there was the genius cover of "From Above," which I'd first heard done by The Telltale Hearts." - Blair


"In 1983, Bernie Kugel decided to record a song for possible inclusion on VOXX RECORDS' Battle of the Garages (Volume Two) compilation LP of modern-days garage bands. The only problem was that, having dissolved his college band, The Good, Bernie was without an actual garage band. This was of little concern, as Bernie corraled drummer and record producer, Mike Brydalski, to perform both tasks. Bernie played guitar, bass and sang on an updated cover of THE STOICS' "Enough of What I Need" and sent the finished master to Greg Shaw at VOXX.

A short time later, Bernie asked his pal, Mad Louie, what he thought a good name for a garage band would be. "I've always thought Mystic Eyes would make a great band name," the Mad One replied.

"Then Mystic Eyes it shall be!" belched Bernie in between swigs of Pepsi.

Sure enough, the track made the cut for the album! Bernie cobbled together a ficticious band bio for the LP liner notes and then set about beating the bush for like-minded garage-mates.

In December, Bernie got so drunk at his sister-in-law's wedding reception that he invited Craig Davison to join his new band. They exchanged phone numbers just as 1983 came to a close." - Craig P. Davison 
"Strictly speaking, there have been garage bands as long as there have been garages and rock music. But in today's rock parlance, the term refers specifically to the American suburban bands that sprang up in the mid-60's in the wake of the British invasion. Another word that was originally used to refer to these bands was ''punk,'' and by the late 60's such bands were also being called ''psychedelic,'' but the phenomenon remained the same - bands that were loud and obnoxiously bratty, banging out rhythm-and-blues and assorted pop trash in a style much influenced by the early Rolling Stones.

With the coming of the late 60's, ''rock poetry,'' and the self-conscious art-rock inspired by the Beatles' ''Sgt. Pepper'' album, garage-rock went underground. The term ''garage band'' took on derogatory connotations; it was what you called a semi- amateur band that ineptly played renditions of better bands' hits. But of course garage bands endured. Iggy and the Stooges, the late 60's band that was an important forerunner of punk rock as we now know it, was a classic garage band. And with the coming of the new punk sensibility to New York and London in the late 70's, garage-type bands like the Ramones and the Heartbreakers suddenly found themselves on the cutting edge of a new wave subculture.

In today's rock, the garage is a state of mind. Some of the bands heard on the ROIR ''Garage Sale'' sampler are suburban bands, but others are inner-city bands for whom the garage designation is a matter of influences and style. New York City's Vipers, for example, write and play contemporary pop-rock songs with stylistic roots in the mid-60's on their own first album, ''Outta the Nest'' (PVC/Jem). They also share with the Mosquitos (and many other contemporary bands) an abiding interest in pioneering 60's psychedelic bands like the 13th Floor Elevators. The ROIR cassette indicates that the present garage-band scene is really a spectrum of styles.

Above all, garage-rock is a do-it- yourself esthetic. So you want to be a rock-and-roll star? If you can make enough noise to drive your family to distraction and rattle your neighbors' windows, you're on the way. "
By ROBERT PALMER (Published: March 20, 1985, NY Times)