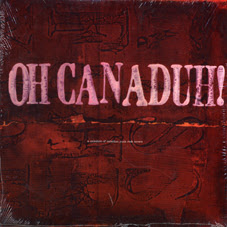 "For the most part, Americans were woefully ignorant of the absolutely explosive and also really fresh and varied Vancouver, Canada, punk scene of 1978-1981, which was easily the best, most fun, and most creative scene in all of North America then (after L.A. and San Francisco faltered) of any kind, punk or otherwise. It being a more open-minded period of just what punk was or could be, harsh electronic nutcases such as the UJ3RK5 and hard-power-popsters Pointed Sticks could all happily share the bill with such guitar-pounding legends as (the original) D.O.A. and (Canadian) Subhumans.

Of course, modern Northwest Canadian bands are aware of this rich legacy, as are the vets from just below the border in Seattle, so here's a great tribute CD to that era, with some of the also terrific Eastern Canada bands of the time (such as the Viletones and Teenage Head) feted too (though there's no Diodes track!), even though, being 3,000 miles away, the connection was minimal then.

Best of all, the selections here prove that the artists know their stuff, as practically all the original releases are long out of print, and very expensive! The best things are the Tonics' loving recreation of the K-Tels' (later Young Canadians) "I Hate Music," one of a few selections here from the super-rare (like the spotted Dodo), incredible scene-document Vancouver Complication compilation; the Young Fresh Fellows trying on punk-shoes for a smash-up of D.O.A.'s debut 7" single "Disco Sucks"; the Fastbacks chunking up the Modernettes' "Won't Have to Worry"; and Bum's churning, spitting look at the Viletones' two-chord mania "Screaming Fist" 7".

Whether you know the originals or not (probably you won't), this is a great modern punk record, period." - by Jack Rabid, The Big Takeover

Thx, seems like a very good comp., gonna have a listen.

thanks good stuff, you always have a good music

Thanks for posting this, I'd been looking for it ever since I came across the first one. And thanks for the kind words re. Five Bucks on By-Tor. Always nice to get some feedback!

Great post, I have the LP but not on mp3, so you you save me the work to convert it. Thank you.

A nice comp, thanks!

I'm not really keen on the phrase either. Usually I can find enough reviews for a post to keep it all upbeat and positive, using different sources to keep it all interesting.
This time around I could only find the allmusic blurb.

Perhaps someone will start a blog that reviews the musical discoveries that they've downloaded?

Copies of both volumes are still available!