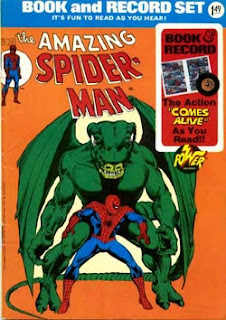 "Hey kid... are you surfin' the net looking for corn? That's right, "corn", with a "c". Today we're serving up a big helping of classic corny Spidey stuff in the shape of the wonderful "Power Records" Book & Record sets from the mid-70's." - spiderfan.org


"In the 1970s and 1980s - the age before DVD box sets - young fans of movies and TV shows had a different outlet to explore their favorite franchise. To wit, there was Power Records, a division of Peter Pan Industries, which released a bevy of full-color comic-book stories to go with 7 inch (45 rpm) audio albums. Here, you truly got two toys for the price of one.

At home, you could read along to the soundtrack on the record player, and on the way to Grandma's house, you could just read the comic book in the book seat. These Power Record items were called "BOOK AND RECORD SETS" and were advertised with the line "It's fun to read as you hear!" Or, to put it another way (as the comic book covers did...) "The Action COMES ALIVE As You Read!!" Or, as the backs of the books read, these are adventures that are "fun AND educational." - John Kenneth Muir


"Power Records (aka Peter Pan Records, aka Zap Records) produced two distinct Spider-Man Book & Record sets as part of their range of that time. Their range also included various other Marvel character stories, plus Frankenstein, Dracula, and various Planet of the Apes tales. The two Spidey Book & Record sets were Spider-Man: The Mark of the Man-Wolf (PR10), and this one - Spider-Man: Invasion of the Dragon Men (PR24).

This tale runs 11:45, on two sides of a 45 rpm single. On the disk, the story is "Written and Produced by Arthur Korb". That's not a name that I recognise. Nor do I recognise the artwork on the cover or in the story.

The tale itself isn't very complex. A bunch of meteors fall from the sky, and drop down an army of dragon-men, and one huge fire-breathing dragon leader, who speaks perfect English, and who declares himself "Draco, King of the Dragon-Men, Master of the Heavens, etc, etc..." - spiderfan.org

When you listen and read along, it goes like this:


This rip, crackles and all comes from my room-mate Jordan from Halifax, who's had it ever since he was just a wee lad. 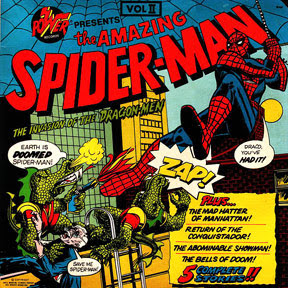 "Here's the second Power Records Spider-Man long player, with a different guy voicing him & maybe what, three other actors playing the rest of the entire cast on every story? These days it kinda sounds to me like this whole album was cut in a day, but as a kid I never minded at all. Here's a testament to how often I must've played this thing; it's been 32 years and I still frequently quote several of the astronomy scene lines from "The Invasion of the Dragon-Men" in my head when I'm noticing the stars at night ("Looks like the letter 'W'!", "Couldja pour me a Coke outta that dipper?"). Any way you spin it that's probably pretty lame." - Jason


TRACKLIST:
The Invasion Of The Dragon-Men
Return Of The Conquistador
The Mad Hatter Of Manhattan
The Abominable Showman
The Bells Of Doom
(bonus) The Mark Of The Man-Wolf

i had this thing when i was a little one----- lookin foreward to hearing it again!!!!

I also had this as a lad....and played the record so many times I STILL remember some of the words!!!! Power Records are classic. I had the Spiderman one with both Draco/Man Wolf in a big size LP.