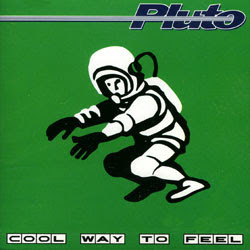 "There just aren't enough good three to three and a half minute pop songs out there that you can drive your car off a cliff to and still be smiling, you know." - Ian Jones


"Straight ahead punk-pop with a thick guitar sound and really good songwriting. Does life get any better than this? Well, maybe, but you'd have to work real hard at it.

Let me reiterate: this ain't particularly complicated, fast, mean, ugly or politically motivated. If Pluto gets around to a fourth chord on a song, you might fall over in shock. But the finest pleasures are simple ones, and Pluto is as tasty as this stuff comes.

You just have to listen for a few seconds, and you'll be hooked, too. Vancouver seems to have taken the cue from all the great pop/punk bands in Seattle and then done them one better. First Cub and now Pluto. Trust me. You need your Mint." - Jon Worley


"Once upon a time there were four musicians living in Rainsville, B.C. A togetherness 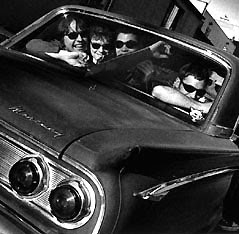 formed through their common love of music, and from this bond sprouted a band named Pluto.

The band's catchy, guitar-pop style seemed to be liked by the people, so they released records on the small indie labels Shake and Popgun Records. Little did they know that one of those people who liked the band was a Baker named Bill. Bill liked them so much that he led them to a land that was Minty fresh.

This fabled land had its own record label, and said label released Cool Way to Feel. After Pluto toured the country back and forth, forth and back, the people of Canada agreed that the record suited its name. The record also received some noteworthy music industry acclaim and rustling could be heard outside the main gates of Mint Records. Major Label Reps were hiding in the shrubbery!

The Minty fresh land, still so nice, just wasn't big enough anymore, and after a tearful (speculation, okay? get over it) departure, the boys of Pluto wandered to the main gates, where they happened upon an eccentric gent and a hot-air balloon. Accounts are blurry from there; some say they went voluntarily, some say they were abducted and some are too scared to talk about it, but Pluto now have their signatures on a contract with the dreaded "Major Label." Pluto are now Virgins...

...So the next level of success would be the dreaded backlash?

"I think that Pluto has been going through a constant state of backlash since we played our first show, there's always been someone putting us down, mainly the Communists though, the Reds... I think we've avoided it because we've never really been part of any scene, the main thing about us is that we've never claimed to be who we're not."

Ian: "I think the more popular you get these days anyway, the more you suck."

John: "Yah, we'll have to stop now or we'll start sucking. We used to want it all, now we just want a chance to do what we want to do."

Well, whatever they're doing, by the amount of attention Pluto is getting, they do seem to be cutting the mustard, as it were. But how do they describe Pluto?

"It's white soul with loud guitars... It's dislocated pop... it's what you need."

Well, whatever it is, for a growing number of people, it's out of this world.

And they lived happily ever after (speculation, again, get over it)." - Paul 'Grimm' Watkin 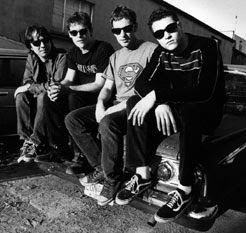 Hello? You still out there somewhere, kind music uploader? There are a few of us who miss ya over on this end of the interent connection. :)

This is some great stuff. Thanks for all the awesome sounds ya post.

DUDE, I can't believe I just randomly looked this up today and found you put this up online, you are a GOD to me.

Thanks for keeping the memories alive.

Thanks!,
IF this is the same Pluto, I must have played their 1996 cd hundreds of times!